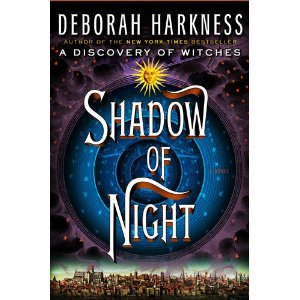 I read Deborah Harkness’s A Discovery of Witches last year and mostly enjoyed it, although I could not recall all of the details of the plot when I picked up the sequel this summer. I remember the main points. Harkness is a history professor who capitalized on the supernatural craze going on in books these days. Her first book was marketed as a grown up Twilight. It told the story of Diana, a young historian who studies the history of alchemy. While on sabbatical at Oxford, she stumbled on a mysterious book that she could barely read as the text kept moving around. This awoke something in Diana, who is descended from a long line of witches, but who seemed to have no power herself. It also sent out some sort of signal to all of the creatures in the area who swarmed to the library to see the book.

In Harkness’s world, there are witches, vampires and daemons living amongst humans. They are ruled by a Congregation that does not allow them to interfere with humans nor to engage in personal relationships among themselves. The three groups of creatures tend not to interact much because of that. The vampires and witches are pretty traditional. No sparkly vamps here, thankfully. The daemons are interesting. They tend to be the most creative people in our history like Christopher Marlowe.

Anyway, Diana’s retrieval of the book sparks the attention of lots of creatures, but specifically Matthew, a vampire from the Middle Ages, who of course, pretty quickly falls in love with her and is determined to protect her. A lot of other stuff happens that I really don’t remember too much of. They start in Oxford, go to Matthew’s vampire family’s home in France for a while (I remember that part dragging on a bit) and then met up with Diana’s aunt Sarah and her partner, Emily, both witches, in Massachusetts.

Because Matthew and Diana are in love, they are a threat to the Congregation, who comes after them. At the end of the first book, they learn that Diana was spell-bound by her parents before their death to protect her. She has strange powers that she can’t really control, including the ability to time walk. Matthew and Diana decide that in order to hide from the Congregation and investigate more about the book (which was sent back into the bowels of the library and could not be retrieved again for some reason) and help Diana learn more about her powers, they have to go back in time.

Shadow of Night picked up where A Discovery of Witches ended. Matthew and Diana ended up back in Elizabethan times. I’m a little unclear as to what happened with the Matthew of that time period. Apparently he vanished because two Matthews could not exist at the same time. But really, where did he go? Would he be aware of losing time? I was sort of confused by this. Anyway, they end up in Matthew’s English country house where they meet up with TheSchool of Night, Matthew’s good friends.

They are summoned pretty quickly to meet Matthew’s father, Philippe, in France at the medieval version of the estate that Diana visited in the first book. In present time, Philippe is dead, after being tortured by Nazis during WWII. I didn’t remember any of that at all. So they take off to France where Philippe is very judgmental of his son’s forbidden relationship with a witch. Of course, Diana, being a bit of a Mary Sue, gets him to admire her pretty quickly after that. They’re there for a while, some celebratory stuff happens and then they have to head back to England. Matthew is a spy for the court of Queen Elizabeth so they move their household to London for a while and find Diana some medieval witches to study with to help her unleash her latent powers. She studies for about five minutes before they are off again to Prague where they believe their mysterious book, Ashmole 782, can be found. They stay there for a while and then go back to London.

Here is the issue of the novel. There’s a lot of traveling and a lot of (admittedly interesting) detail about the Elizabethan world (of which Harkness is a professor), however, not a lot actually happens. I think this happened in the first book too but I can’t quite remember. Harkness is clearly having fun describing how long it takes low maintenance Diana to get dressed in 1590 and introducing historical characters like Walter Raleigh and Queen Elizabeth I herself. But the narrative is slow. It was a long book but I finished the most recent Game of Thrones novel in five days and that was way longer. This took me almost two weeks to read, I think. It felt like a lot of filler designed to set up the third book in the trilogy.

Matthew and Diana also aren’t the most interesting characters. I can’t quite figure everyone out. Matthew is the typical stoic vampire, haunted by his more demonic past. But he has this blood rage that I don’t remember at all from the first book that is a big point in this novel, primarily, I think, to set up the motives of two other characters. Diana, of course, is this amazing witch who despite the block on her powers, is one of the most powerful types of witches out there. Clearly. They’re all magically in love with each other. While I hate to compare this to Twilight, it’s similar in that I don’t quite see what attracts these two to each other. That’s a problem. You can’t create a strong romance between two slightly underdeveloped characters and expect people to care. Maybe I’m being too picky though.

Anyway, if you’re into quasi-historical fiction or intelligent supernatural novels, check this out. Despite being a bit slow, there were some strong and interesting moments. I like a lot of the secondary characters who only made cameos in this book. Some chapters flash forward to the present where Diana and Matthew’s allies are gathering for an inevitable clash with the Congregation that will likely be the center of the last novel in the series. Those were pretty interesting although at the end something pretty major happened off screen in the present that I hope is explained further in the next book… although I probably won’t remember the specifics!

Buy it at amazon and Barnes & Noble.